How to convert a PowerPoint document to PDF online : 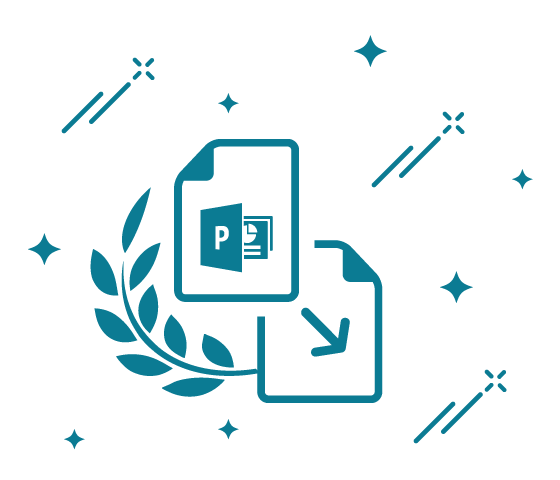 PowerPoint was first designed for Apple
In 1984, Robert Gaskins started to build with his team what became PowerPoint while working at a company called Forethought
The idea was to develop an easy to use presentation program for businesses, based on a series of slides, including text and graphical elements. They called the program Presenter, and it was initially designed for Apple’s Macintosh computers. Because of trademark issues, the name was changed to PowerPoint in 1987.
The PowerPoint official release in 1987 attracted the first venture capital investment ever made by Apple . In an ironic twist of events, later that year, Microsoft, who was working on a presentation application of its own, purchased the rights to PowerPoint for $14 million. It was the first major acquisition for Microsoft who kept Gaskins at the head of the project for five more years. Included in Microsoft Office since the beginning, PowerPoint is the presentation program the most used in the world today.
People have strong views about slideshows
Whether you love or hate PowerPoint presentations, the fact is that almost everyone, at work and beyond, is using them.
PowerPoint detractors argue that presentation slides make us less intelligent. There is even a book about it: How PowerPoint Makes You Stupid, by Franck Frommer. There are two main reasons for this. First, nuance often cannot be rendered by bulleted lists and icons, which can distort reality by oversimplifying it. Of course, one might object that the presenter’s job is to make the presentation as accurate as possible. But then, there is another issue: people can't read and listen at the same time. When you add graphic and interactive elements, you can cause a significant cognitive load for the public. That is why Amazon (and many other companies) have even banned PowerPoint presentations in favor of the old-fashioned memo.
Did you know that the US Military is often pointed at for its obsessive use of PowerPoint? There is even an expression for that: “PowerPoint Ranger”! It went so far that in 2010 the general James N. Mattis , who later became U.S. Secretary of Defense, spoke against it.
There are many PowerPoint extensions
PPTX is part of Microsoft Office Open XML specification (also known as OOXML or OpenXML) and was introduced with Office 2007. Like its text and spreadsheets counterparts (aka DOCX and XLSX), PPTX is a zipped, XML-based file format. Since Microsoft PowerPoint 2007, PPTX is the default file format when creating a new presentation.
So what are the main differences between PPT and PPTX?
First, .pptx files can be up to 75% smaller than their .ppt counterparts. Then, you get less corrupted files with the .pptx version. The level of security is significantly higher since macros and personal data can be identified and excluded.
Microsoft Office Open XML is a standard (ISO/IEC 29500); this means that anyone can access the specifications and create programs that can view, convert, and edit PPTX files.
Did you know there are other formats for presentation slides?
The PPSX format is similar to PPTX except that it will display the presentation directly while PPTX files open to the editor mode. PPTM is a presentation format that includes advanced support for macros, and POTX is dedicated to template creation.
Other tools