How to convert a PDF document to TIFF online: 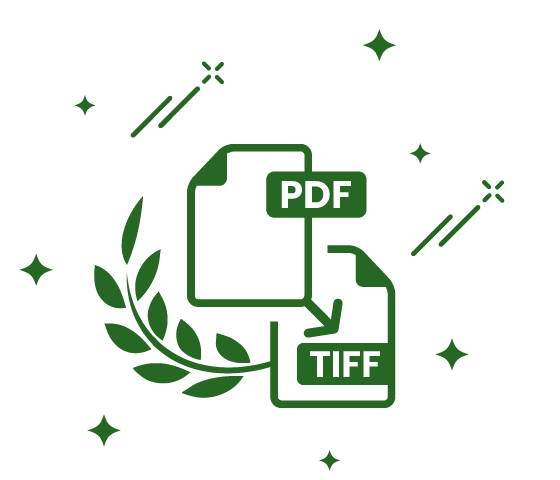 The TIFF format hasn’t evolved in almost 30 years
Developed in 1986 by Microsoft & Aldus Corporation (now Adobe), the TIFF (Tagged Information File Format, file extensions .tif or .tiff) format was designed to provide a standardized image format for scanned documents. Before TIFF, each manufacturer had his proprietary format, which could lead to serious compatibility issues for users.
TIFF quickly became widely adopted, and the format is so stable that the last revision , also referenced as TIFF 6.0, was released in 1992 and hasn’t been updated since.
A platform-independent and very flexible format
TIFF is designed as a universal image container that everyone can use to his purpose. It is one of those rare raster image formats allowing multiple pages in one file and offering a wide range of options in terms of resolution, color modes (black & white, greyscale, color schemes), and compression schemes ( LZW , CCITT, and JPG-Based for example).
With such a rich palette of options, TIFF is the best container to store highly detailed image information, and it keeps on being the number one option for digital image preservation.
Difference between TIFF, PNG, and JPEG
TIFF is an ideal format for document archiving and publishing purposes with its multipage support and lossless compression. Still, it is not the format one would prefer to share images over the Web, because of its size, limited to 4 GB. In this case, it is better to convert the image to PNG or JPEG.
JPEG offers a compromise between image quality and file size. However, its smaller file size has a cost, as JPEG uses a lossy compression algorithm, which results in data loss and possible artifacts appearance, especially when the file is opened and edited several times.
PNG , on the other hand, is a lossless format with a large color range display for the Web. It also supports transparency and a sophisticated progressive display option ideal for online viewing applications.
Other tools