How to convert a PNG to PDF online : 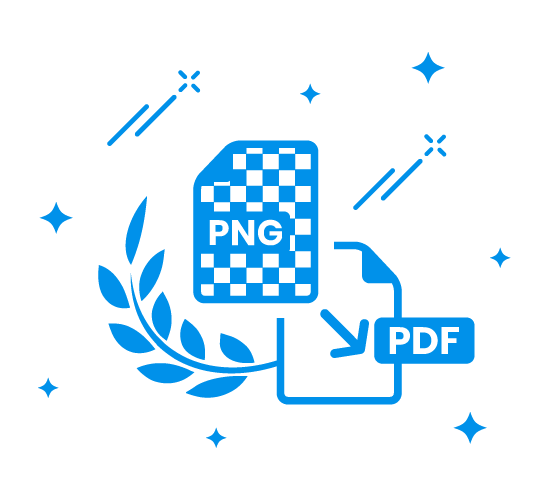 The history of the PNG format
In 1993, the company Unisys noticed that CompuServe was using, without knowing it, its patent-protected lossless compression algorithm in its GIF file format. In 1994 both companies came to an understanding which, for various reasons, generated such a considerable protest reaction , that Time Magazine covered the event. Many upset developers and users removed their GIF files or converted them to the royalty-free JPEG. But JPEG uses lossy compression, so one of the protesting groups, formed by leaders of the online graphics community, began working on a lossless and patent-free version of GIF.
Their efforts produced the PNG (Portable Network Graphics, sometimes called PNG is Not a GIF) specification in 1995.
A flexible format for digital design
PNG is a raster-graphics file format that supports data compression without quality loss.
On the contrary to GIF, PNG images include a multi-level of transparency (allowing the colors in the image to fade from opaque to transparent) and layers, which makes it the best choice for logos, interface elements, and banners for instance.
PNG displays a large number of colors, from 256 (PNG-8) to 16.7 million (PNG-24). However, you should not use PNG for professional-quality printing purposes. Indeed, this format supports RGB (Red, Green, and Blue), the color space for digital images, and not CMYK (Cyan, Magenta, Yellow, Key/Black), which is for printed materials.
A network-friendly format
PNG is a universal (cross-platform and cross-browser) format and has a well-deserved place among the digital image formats standards recommended by the World Wide Web Consortium ( W3C ).
PNG is designed to work well in online viewing applications thanks to a sophisticated progressive display option. A progressive display shows first an image with low-resolution, and the resolution enhances itself progressively. PNG images load much faster than GIF, for example. Also, PNG keeps the integrity of the colors as much as possible on different platforms (for instance, images created on Mac tend to look darker on PC), making it a favored format for web designers.
Other tools